It started at 3:45 this morning when my alarm went off. I quickly showered, called Chebon (I still don't get why he was willing to come and do this for us, but I can't thank you enough Chebon!!), offered to "re-call" him if I needed to, then started getting my stuff together. Of course, Leslie had been packing for the past two weeks, and had taken care of EVERYTHING (more with that later), but my incidentals needed packing, so I was rushing to get that done, seeing that I waited (as usual) until the last moment to get that stuff packed.

Leslie got up shortly after. While I was in the garage cleaning out the Escape to take to the airport, I see a blur whiz by from my view down the hall into our room, followed by a lot of giggling. Emily was up, and ready! Benjamin, well, not so much..

Chebon got there, we loaded up the Escape, and headed to the airport. Other than me missing the 240 exchange, that went uneventfully.

We got in to the airport, check-in went well, then came the security checkpoint. First, Emily refused to walk through the detector alone, and started throwing a serious fit, so the nice armed guard allowed Leslie to hold her while they went through. I had Benjamin, and right before I stepped through, I double checked my container with all my stuff: Phone, Wallet, Belt, Camera, Camera (yes, two), whatever else I had, all good, so through we went. Alarm.. Okie Dokie, back we go through, and again.. alarm. We did that dance about three times before I reached back in my back pocket and realized I still had Emily's iPhone in my pocket... I guess that's what I get for making sure Emily has an iPhone :)

Then came airplane time. I can't tell you now what I was more concerned with: Benjamin's behavior or my sudden onset of 24 year old angst and deathly fear of flying. We got started, and managed to make it through the first leg of our flight pumping Benjamin full of suckers, fruit snacks, apple chips, drinks, reading books, playing with toys, etc... Which leads me to my next part of this story... the HERO of this entire trip, my wife.

EVERY moment of that airplane trip was thought of in advance... Backup plans had already been thought of, and redundancies were all prepared. I could not believe the efficiency of how Leslie moved from food item to food item, prepared for what problems each item would cause.. Suckers, gottem. As soon as the sucker came out and put in Ben's mouth, an extra baggie for the trash came with it, a bib came around his shirt to protect it, and some wipes came shortly after to take care of the sticky hands. I sat there (while clutching the arms of my chairs with a grip unknown to many humans) wondering what this trip would have looked like had I taken care of the packing.. Yeah, you're there with me, no words can really give that one justice for you either, huh? Yeah..

We landed in Houston, and I was feeling pretty good about the whole thing. First, we had survived the trip, which was a big bonus in my world. Second, Benjamin did really well, considering how he normally is (creature from the black lagoon, king kong, with a dash of the Tasmanian devil rolled into one). We were just off the plane when Leslie mentioned something about the tire on the stroller. Before I could even figure out what she was saying, I heard a gunshot like noise that echoed throughout the ENTIRE airport. In slow motion, my brain processed these thoughts:

- Everybody is completely still in this airport... I mean.. EVERYBODY.
- Nobody looks like they're shooting, so that's a good sign..
- What could that sound have been? I know everybody else in this place is thinking the same thing..
- What was Leslie saying about that tire... uh...oh.

"Sorry folks, just a tire!" I yell as I am pulled away riding the auto-floor mover thingy with Emily, watching Leslie look at me... well, you can imagine that look.

So, now the great stroller is pretty well useless. We made it through the second leg of our flight about the same, save some pretty serious complaints from Emily about her ears on the way down. When we got to Orlando, and after we realized we had gone to the wrong side of the airport for the shuttle (add 30 minutes to the already long morning), Emily says that she sounds funny when she talks. It didn't take me long to start working out what that meant: broken eardrum. While ignoring (as usual) Leslie's comments for me to calm down, I'm firing off texts to Kyle about signs of ruptured eardrum, while simultaneously researching it on my iPhone. After some good advice from Kyle (chill, give it some time), I was still convinced we'd be spending our first day in Orlando in the emergency room, until while we were on the bus heading to Epcot, something popped and Emily yelled, "Aaaaaaaaah!! My voice sounds normal again!" Whew, crisis averted (as if there was really ever one to begin with? Hey, at least I recognize it, that's a step, right?)

We arrived at Epcot around 3 or so. We started with the Spaceship Earth ride, which had ZERO line in it!!! This was a good sign of things to come! Emily freaked for the first second or so, but quickly eased into it, and loved it. We then rushed to our next ride and hopped on the land ride (next to Soaring, which we never got to do because of wait times, and they weren't accepting fast passes.. blah), then made it over to the nemo ride, then to the imagination ride (Emily freaked at the end of that one, little shocker) then over to the Honey I Shrunk The Audience.. Oops on that one, forgot about the lions, snakes, loud noises, etc., but she did... about as good as could be expected with all that stuff flying out at you in 3D.

By then it was close to 7 Florida time. There was some SERIOUS wear on their faces/bodies, so we made it to the countries to try to find something to eat. I was hoping to make it until 9, but after dinner, and squeezing one more land ride out of them, it was clearly time to go. Benjamin had made it the entire day with zero naps (usually two) as well as Emily, and there was no way we could wait another minute for the fireworks show. Oh well, perhaps our next trip :)

They both were out on the bus ride back to the hotel, and now we're back, kids asleep (Emily almost...) and I'm trying to sum up as best I can our first day.

Leslie told me about half way through this post that we'd need to be leaving tomorrow morning at 7AM, which is why my embellishments ceased at a clear point up above, as I'm trying to get through this as quickly as possible to get myself some rest before the Magic Kingdom tomorrow!

Thanks to Chebon for the help this morning, and to Michelle for the great travel plans (Destinations Unlimited.. Everybody should use!!!) and Michael Powers for the great advice on the outdoor Mexican food (Sorry Michael, should not have doubted your abilities to be able to tell me precisely where "Mexico" was at Epcot, you are truly they Yoda of Disney), and to everybody else for all the continued help. Pictures, videos and more posts to follow, so check me on twitter and facebook for more tomorrow.

Happy Disney Day everybody!
Posted by Peter at 9:02 PM 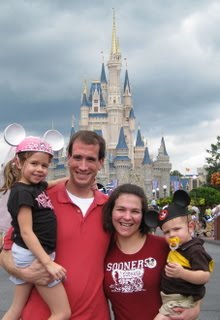